Howdy ! I work at Automattic, we run WordPress.com, Akismet, VaultPress and a few other services. I live in the San Francisco Bay Area, and I'm also an advisor to ContextLogic, SigFig, and True Ventures.

(posting below in case the ad comes down soon). 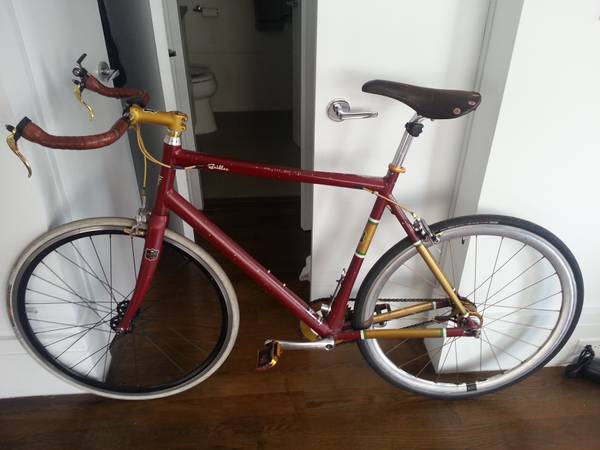 Grab a paper bag, breathe into it and calm your ass down. You’re hyperventilating because you ain’t never seen a deal like this before. Now collect yourself, then keep reading this incredible description that barely serves to do justice to my 2010 Felt Gridlock 3 speed fixed gear bike. Yes 3 SPEED FIXED GEAR. Also known as the greatest bike the city has ever had the privilege of existing around.

What makes this bike so much better than every other bike that has ever been pedaled? Glad you asked. It starts with the paint scheme. It looks like Iron Man if Iron Man were a bike. That’s bold, son. Curb appeal. It’s probably also why some piece of trash stole the front tire that originally came with this beauty. Why didn’t he steal the whole bike? Because he knew he wasn’t man enough. That’s ok, I replaced it with something that looks even more boss. The next thing is the genuine leather seat. My taint has had a love/hate relationship with this particular bit of the machine. But it’s got those swanky brass rivets so I can’t stay mad that it smashed my prostate and has likely rendered fatherhood impossible. But let’s face it, I’d rather have have a bike than a kid.

What else? Let’s talk about that three speed in-the-hub, fixed-gear transmission for a second. It’s as gnarly as it is exotic. Like the tropical, saw-toothed platypus. Which is a species that does’t even exist. Fortunately this crazy ass hub does. It offers 3 speeds, as the name implies. It also offers a terrific chance to introduce that dome of yours to the asphalt if you fucking sleep for one single second on this bitch. So don’t trip. Ride safe. Get a helmet and if you’ve never ridden a fixed gear bike, maybe it’s time to move along, young sir because this back tire doesn’t flip flop and it doesn’t offer any respite. What this bike does offer is a one-way ticket to legits-ville. Find a bowling ball. Then find another one. Your nuts must be at least that big to even consider making this whip the dreamiest object to ever take up too much space in your tiny ass apartment. But you’ll be filled with joy once you throw a leg over this flawless piece of American-made* cycling excellence.

What else? Ryan, the paint’s a little dinged up. Yeah, well, that’s called real life. It comes at you fast, bro. Besides, you really want this glimmering, shimmering sex machine catching the eye of some small time thief? I already told you what happened to the tire. You really don’t want to be living your own version of PeeWee’s big adventure. Consider the lived-in feel a natural crime deterrent. If this bike were denim jeans, it’d be called “de-stressed” and you’d be paying extra for the privilege. I’m not gonna charge you extra for it, though. Cause I’m not trying to take advantage of you. But you should take advantage of this once-in-a-lifetime opportunity.

But, aren’t you sad about selling the greatest bike on earth? No. When you ride this bike once it permanently eliminates your ability to feel sad about anything ever again. Even for little puppies who are afraid to walk down the stairs, because the stairs…they’re so big, and they’re so little. Puppies who are young, but have already discovered the world to be a cold, unforgiving place. But you won’t give a shit about it because you’ll be on your awesome new bike living the dream.

Ryan, is that a toilet in the background? Yes. Why? Because this bike is the shit. And you’ve just learned something else about me. That’s right, my name is Ryan. And your name is lucky motherfucker if you make the best choice of your life and pay me cold, hard cash for this ridiculous ride.

*Felt bikes are imported from Taiwan. Sorry to burst your bubble, homie, but globalization has been restructuring the way products get manufactured and sold since the 80’s. Some believe it’s eroding the American middle class. If you’re the last to know, sorry for party rocking. Read “The World Is Flat.” Form an opinion. Joint the dialog. By the way, the book is like 12 years old so this shouldn’t be news. Shit’s fucked up, but we didn’t start the fire. No we didn’t light it, but we tried to fight it. Now buy this bitchin’ ass bike.

Update: No reason given, but the ad appears to have been removed, now says “This posting has been flagged for removal”